Welcome to the comic book review Star Wars Darth Vader 2! On Fire !. At the end of the article you will have the cover and the link.

Star Wars Darth Vader 2! On Fire! just before the cross-over

We are facing a new volume of very entertaining and high quality space adventures where again, the villain Darth Vader it returns to its full potential. But this time Vader is no longer the all powerful Sith From the previous homonymous series, or the rookie of the prequel, this time we talk about a powerful protagonist but with a trace of doubts towards his emperor. By the way, in this Palpatine saga we can already see him almost as a secondary, or recurring character.

But before continuing I want to say that are you lost? It’s okay, I’ll explain in a moment.

In order of reading, which is not of publication, we have the 4-volume series called Darth Vader Lord Oscuro. In this series we have a young man Anakin just after Episode III Revenge of the Sith. This collection could be the best of the 3 edited to date and how much with the scripts of Soule and drawings of Camuncoli.

I want to make a small clarification and it is that, for now, the series starring Darth Vader are quite acceptable and of a similar quality. Therefore we cannot say that there are ups and downs or that it is an exalted series. No, the Star Wars series are entertaining, but none of them can be said to be wonderful, although they hook a lot for two reasons. The first is that they are very dynamic series, and the second is that the characters and their locations have open doors in our hearts. 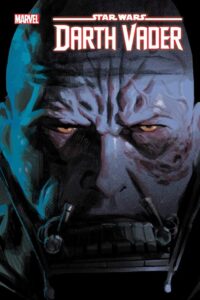 But hey, I was going the other way. I have told you about the Darth Vader Dark Lord series that takes place after Episode III, and now I have to tell you about the collection of 4 volumes called like this one that we are dealing with today, Darth Vader, to dry. Another correct story scripted by Gillen and drawn by the Spanish Larroca whose events narrate the misadventures of a much more mature Sith lord, just after the Episode IV A New Hope. It is also acceptable to clarify that the story takes place at the same time as the first series of Star Wars, the one with the white spine of 13 volumes. Even between series there is a crossover tome titled Star Wars Vader shot down.

And finally I tell you about this series also called Darth Vader, but that for my excel records I have subtitled it 2021, to differentiate it from the previous one. Here the events take place after the Episode V The Empire Strikes Back.

This current series has a drawing printed on the spine in addition to the letters in white, without the red profile of the previous one. Another thing that makes the difference is that on the cover and on the spine it always appears with the title of the volume. So the first book was called The Dark Heart of the Sith and this second To the fire!

I hope that with these clarifications I have opened your eyes more about the Darth Vader series, and its way of reading and publishing. And I hope you buy them all because they are very cool, especially if you are fans of the galactic saga since these stories are canon.

I would like to make a point before finishing, and that is that the next volume will already go into the cross-over that is coming with the other series of the current saga. And i mean Star Wars (2021), Dath Vader (2021), Doctor Aphra (2021) and Bounty Hunter. We will see how that crossroads of our heroes points. I’ll see you on the web with that article in a few months. 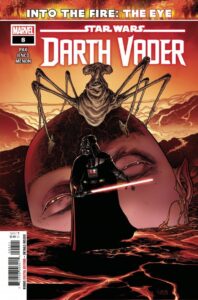 Second volume of the new series starring the Dark Lord.

Darth Vader has failed to lure his son, Luke Skywalker, to the dark side. Vader seeks revenge against those who hid Luke from him for all these years, and in doing so he nearly betrays his master, Palpatine, who lecture, beat, and tear his apprentice apart as punishment. Now, the Dark Lord crawls across Mustafar’s burned surface with vengeance on his mind.

But when Vader gets close to the key to Palpatine’s greatest secret, Bestoon’s deadly assassin Ochi stands in his way. Vader and Ochi engage in the battle of their lives, with the Emperor’s fate in the balance; But how much of this death scenario is part of Palpatine’s grand plan?

Here is the link to the publisher and the cover edited by Planeta Cómics in Spain. 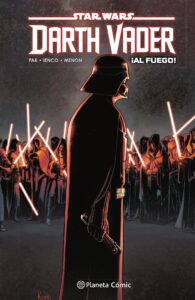 Greetings and be happy