Young German creates a replica of the deceased Myspace as a joke and sees the network quickly beat more than 200 thousand users.

For those who don’t remember, Myspace was a craze in the early 00s by allowing users to build profiles with personal information and their favorite music. The network won the sympathy of artists who at first responded personally to fans and created musical phenomena, such as the then teenager Malú Magalhães.

Anton Röhm, a young German who is only 19 years old, is the creator of this new social network. An, the name in his profile on the network, saw his site gain more than 200 thousand users in just over 1 year on the air. He declares that the site is a friendly place to have fun, make friends and be creative. Furthermore, for the 2000s generation, the platform follows a whole nostalgic retro aesthetic. Your profile is customizable through HTML, a list of your top 8 friends, tools that are very reminiscent of MySpace, one of the great social networks that impacted and changed the way the whole world interacts online.

“No content suggestions begging for attention,” is how the creator describes SpaceHey. As you know, today most sites use algorithms to filter content that may interest you or less. In terms of marketing, we couldn’t have a better tool, as we would only have access to posts and people relevant to us. However, over time, it proved to be a great tool for storing and selling data, in addition to creating small social bubbles.

Much of society, especially those described “Millennials“, they miss social networks at the beginning, which did not serve as a buying and selling platform, but a way to relate and have fun with old and new friends. 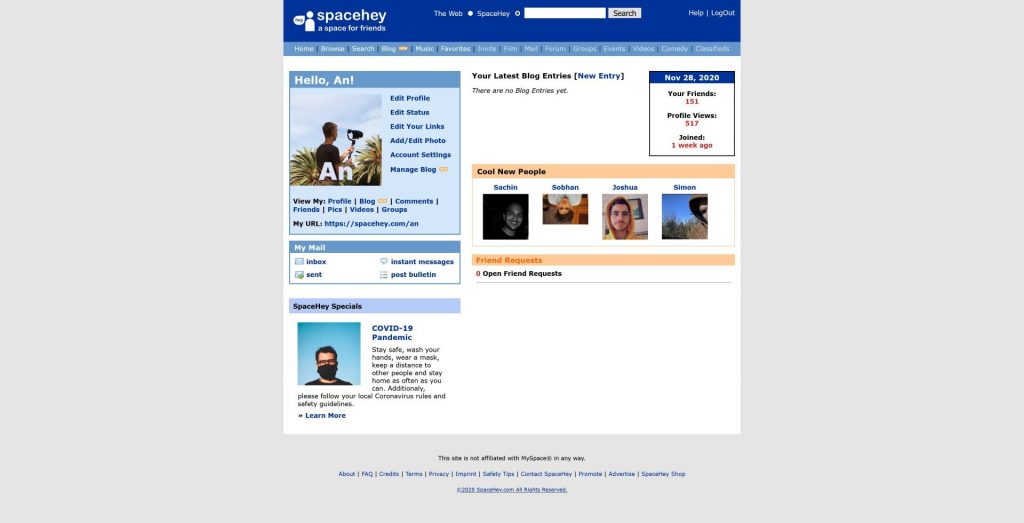 Perfil do “An” no SpaceHey

It’s ironic to see a 2007-style social network gain relevance at the same time that Mark Zuckerberg is launching his new platform, Meta. The experience that the creator of Facebook promises with Meta is much more immersive, to intensify and improve the user experience, but despite the curiosity of the general public, many people do not intend to get involved anymore. It is normal today to see people reporting their withdrawal from social networks, and seeking new experiences in the outside world. The excessive use of social networks is directly related to the increase in psychological illnesses in the population, a case that has worsened with the pandemic period, when that became our entire social contact. With that, maybe returning social networks to their basic structures is not a bad idea.

Or, it could be just people who felt the nostalgia and decided to participate in the site, but soon it passes.

What we do know for now is that An’s platform keeps gaining followers. We don’t see many Brazilians, maybe because the site is entirely in English, but I believe that we will soon see more Brazil there.

Musician, composer and screenwriter with his left foot sunk in the art and his right foot wanting to be the left one.