There are a lot of Christmas records published over the years and in domestic pop, but few of them reach such a status that they are remembered even after years or even published again. It is a bit different with Helena Vondráčková, so a little bit after a quarter of a century there is again “Christmas with Helena” in a package with added value.

Tracks: CD1: Amazing Grace, Silent Night (Stille Nacht, heilige Nacht), Driving Home for Christmas, Here Is Christmas, Please Come Home for Christmas, No More Blue Christmases, Christmas (Mistletoe and Wine), Grown-Up Christmas List, Rockin’Around the Christmas Tree), When You Tell Me That You Love Me, Wanting to Sleep, Ave Maria (Prelude and Fugue in C Major), Carol Mix: • Christmas Eve has come • I would like to go to Bethlehem • She was the way, it was trampled • Wallachian sheep grazed • Christ the Lord was born • I bring you a newspaper • Christ the Lord was born CD2: Come with us (Who’ll Come with Me [David’s Song]), Here are the holidays again (Alle Jahre wieder), Bells (Kolokolčik), Again clinking frost (Sleigh Ride), Come to Christmas home (Please Come Home for Christmas), Prince my little one, sleep, (Schlafe, mein Prinzchen schlaf ein), Son of God was born to us, Maria went, she went to paradise, The most generous day (Mistletoe and Wine), The Lord God wanted it (Senor Santa Claus), Christmas polka (Marry Christmas Polka), Mixture: • The Lord comes to us (O Holy Night) • Jingle Bells • The Son of the Lord is with us, Merry Christmas

While in the case of men, for example, in the case of Karel Gott and his album “Christmas in Golden Prague” or Jan Ledecký and the record “Promises to Be Fulfilled at Christmas”, it is reissued quite often, in women’s presentations festive collections that are published after years and are considered cult , there really isn’t much in domestic pop. However, Helena Vondráčková managed a project in the mid-1990s that is still worth attention after more than twenty-five years. And so there’s the album “Christmas with Helena” again, with bonuses and attractions.

Universal does not know much about the reissue of home records, it is seldom clear from the final product that it is not just a re-released album. However, this is not the case with the album “Christmas with Helena”. The basic fourteen songs (the final mix of carols is taken as one song) is supplemented by a second disc, which is a record of a Christmas performance in Prague’s Lucerna from 1996. And not only that. The ensemble underwent sound remastering with Martin Zajíček and the 24-page booklet is packed with photographs, lyrics and accompanying information. The only thing that bothers us is the fact that the order of the lyrics does not match the tracklist. The original edition boasts a diamond plate for more than one hundred thousand pieces sold. The production of the recording was spared, in addition to the protagonist, Felix Slováček’s band plays here, there is also the Bambini di Praga choir, several soloists and the vocal band Prestissimo. Nevertheless, the first disc looks a little drowsier on me. It is built for the most part on Anglo-American standards and traditional with Czech verses, which were provided by experienced matadors of the written word Zdeněk Borovec and Eduard Krečmar. However, despite the aforementioned experience and hordes of great lyrics, the former almost broke his teeth at Re’s version of “Driving Home for Christmas,” which he honored for “At Christmas.” “After all, I’m out of town, yeah, oh, wind, shut the antenna down this is simply cumbersome, although to a relatively specific melody, any text is grafted complicated. Maybe a bit of more classic carols like “Want to Sleep” or “Silent Night”, more rhythmic, airier songs, wouldn’t matter. However, the second CD offers only a handful of duplicate songs (“Come home for Christmas” and “The most generous day”, which really worked) and the variety that is not only helped by a change of rhythm in polka, for example (” Christmas polka “), but also the participation of three guests – Jiří Korn, Marta Kubišová and Karel Černoch. At the ends of both discs there are also mixtures, modernly called medley songs, which both CDs jewel. And, of course, we must not forget the occasional solo singing of members of the famous Bambini di Praga choir Míša Raisová, Tereza Najdekrová (remember one of the finalists of the third SuperStar series?), Zuzana Šejtková or Ondrej Valenta. 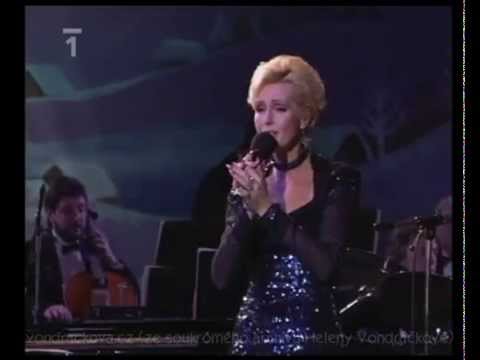 With both discs, you will spend a pleasant hour and a half, and then you will certainly not say that you regret the wasted time. Although Helena Vondráčková lacks the strength and drive of Lucie Bílá in her voice, she has the technique and experience and they played a lot with the producer Adam Novák with the selection of songs. If we add the fact that her solo debut “Helena Vondráčková Island” was released in a re-edition at Supraphon this year, her fans will have a very rich holiday this year.

REVIEW: Helena Vondráčková remembers the album “Christmas with Helena” with a successful reissue